no images were found

no images were found

Shamanic Paintings
& the Stories Behind Them: Part One

The Secret: When Bobcat Walks Through Winter 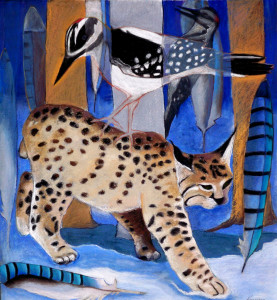 It was mid-winter. The air outside was crackling with cold, frigid and sharp. I was standing at the kitchen sink doing dishes, looking out into the frozen forest to the west of the house, when I heard an insistent pecking sound on the outside wall of the house. At first it sounded like the pecking of a solitary woodpecker, but that lone bird was quickly joined by several others, all pecking on the house, creating an incessant, staccato drumming sound. I couldn’t see the birds from inside, so I tiptoed out into the cold of the deck on the south side of the house, intending to silently poke my head around the corner to see them. They heard my approach,  however, and just as I reached the corner of the house,  flew off as one into the frozen forest to the west of the house, settling into a large, leafless maple just beyond the enormous hill of plowed snow on the far side of the driveway. They were soon joined by a group of several very raucous blue jays who flew in from the north in an avian frenzy, before finally settling into the maple with the woodpeckers, where they kept up their racket. These birds now had my full attention. As I gazed at them, wondering what they were upset about, furry, tufted ears appeared above the hill of plowed snow, followed by the eyes, then the entire head, of a very large bobcat. It casually climbed to the top of the snowbank, looking straight at me the entire time. Once at the top of the bank, it paused for several minutes, as we stared into one another’s eyes. Then it walked down the near side of the snowbank, and slowly and unconcernedly walked the full length of the curving driveway, reentering the forest on the north side of the house. A teaching about its medicine had been shared with me during the minutes we had stared into one another’s eyes:

When Bobcat walks through winter, she hides her secrets among the trees of the frozen forest. Woodpecker drums notice of Bobcat’s coming, while Blue Jay flies above her, sacrificing feathers to mark what is hidden, thus revealing Bobcat’s secrets for those who can hear and see.

This painting is an expression of my shamanic memory of this unusual event. The original and prints are available through the art gallery at The Standing Bear Center for Shamanic Studies. You can also contact me directly online or by calling me: 207.664-0752.

“The Cloud” – Working with Creative Energy Over Time: Part Two 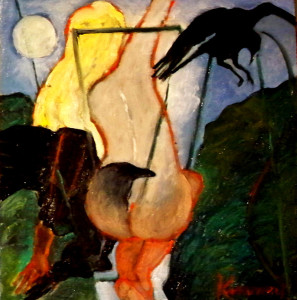 Continuing to attempt to reconnect with painting sketches and notes created back in 1994 for paintings that were never realized, I began working with the second such notated sketch, for a painting of another dream image. Although the 12 x 12″ format doesn’t match all the sketch proportions, I want to move through these old images quickly, on the way to creating new work, perhaps in a new style of painting, and the panels are ready to go. In addition, these 12 x 12″ gessoed panels already have painted sketches on them for other paintings begun but never finished, so…this painting is a combination of two old painting sketches/starts combined with a more recent sketch and painted in a new way – wet on wet. The painted sketch on the panel was of a nude with some abstract shapes. As I worked to bring all three images and the various creative energies that once informed each into one cohesive composition combining the old energies with my current creative energy, the figure became an image of me reaching for the cloud and its meaning, expressing what I felt in the dream. The painting was just finished and still very wet when I photographed it in the studio, so has some glare…I’ll replace the photo once the painting is dry enough to take outside and photograph in natural light.

The sketches were made following a dream on the night of October 15, 1994. Here are the notes accompanying the sketches: In the dream, I walk from the house described in another recent dream, out into the surrounding landscape. I look up at the sky because I hear what I think might be Canada geese. Then I notice the strange triangular cloud appearing between two green mountains. As I watch, a large black bird flies to the cloud and settles on it, then many more come. I think I’m witnessing an important event, and then realize that the important event I’m witnessing is that I’m being shown a painting. In the dream I look around for my Polaroid camera, as I don’t want to forget the image and want to record it in case I want to paint it. I see the camera laying on the ground in the snow next to my typewriter.  Both are partially covered with snow and I am dismayed, as I think they will be destroyed by getting wet. I notice that green lights on both of them are indicating that they are still operating. I feel elated at seeing this. I brush the snow off the typewriter, then pick up the Polaroid and photograph the bird on the cloud for future reference. 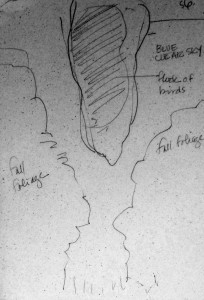 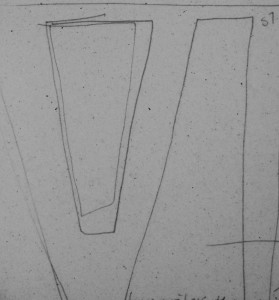 Sketch No. 2 for “The Cloud,” which shows the “underlying structure of the image,” as it was described to me in the dream.

The Source:
Working with Creative Energy Over Time 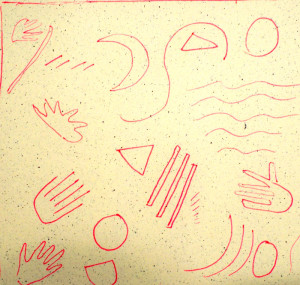 Back in the studio after a rather long hiatus; wondering what I would paint; knowing that after a break of several months, it would be impossible to go back to the exact atmosphere or reconnect with the same energy of the paintings I had planned to do before events took me out of the studio, I began looking through sketchbooks, and came upon a very simple sketch made of a dream image I had wanted to paint way back in 1994, but had never gotten to.

In the dream, I was shown an image that I was told was a sort of prototype or was typical of what the images in my new paintings would look like. I felt ecstatic and energized by the image and told myself to remember it upon waking, so I could start working with that type of imagery. The colors were very light for me, ultramarine, cerulean, thalo, with a lot of white; pinks, pale oranges, and earth tones, particularly burnt sienna. It came to me that if I wanted to try and paint this image all these years later, I needed to somehow project myself back into the dream state in which I saw the original image, and let myself paint freely from there. When I began working with the image, however, I found it was too old; that I could not revisit it in its original energetic form after so much time had passed. I nevertheless tried, but the result was a bland, boring painting totally lacking in energy. As I looked at it, horrified, something shifted, and I began working over the original shapes. A few hours later, even more horrified, I realized that it now looked like a very poorly executed blob of an abstract painting. 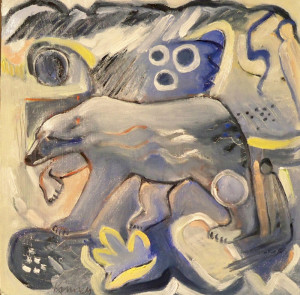 Finally, I began to sense an animal spirit presence trying to make itself known in the painting. After much more staring at the painting, I realized it was a polar bear. “Hmmmm,” I thought. “Well, why not? It can’t get any worse.” After two more painting sessions, here’s the result:

“The Source” is still very wet and unframed, but available for sale through Turtle Mountain Mythic Art.

The moral of this story being…I think… that like everything else in life, creative energy isn’t static. While it may shift and change over time, if you love it enough to make an effort to reconnect with it, old, almost forgotten energy will reveal itself to you in its new form.

Posted in My Process
"Creating a work of art is essentially a conversation between artist and image that begins long before brush is put to canvas and continues on long after the painting is physically finished."
- Scarlet Kinney